GTAC Experts are former Regional Export Control Officers (ECOs) for the Bureau of Industry and Security (BIS) responsible for assisting companies throughout the world comply with sanctions and trade restrictions in exporting U.S. origin commodities to Russia, Iran, China and other parts of the world. We are multi-lingual and have assisted many companies, trade associations, and foreign governments in facilitating secure international trade. Let GTAC’s U.S. government-trained, experienced and internationally respected staff assist your company with your trade compliance needs. Contact us for more information.

Sanctions: What Everyone Needs to Know
For a concise, authoritative overview of a little-understood yet extremely important phenomenon in world politics: the use of economic sanctions by one country to punish another, we recommended this new book (Oxford University Press; 1st edition, September 27, 2022). It’s hard to browse the news without seeing reports of yet another imposition of sanctions by one country on another. The United States has sanctions against more than 30 countries. Russia has repeatedly imposed sanctions against former Soviet republics. China has developed its own approach, including targeting private entities such as the NBA. And it’s not just major powers: Japan and South Korea have sanctioned each other over WWII and colonial legacies; Saudi Arabia against Qatar because of differences over Iran; and France, Germany, and Norway against Brazil over the Amazon forest and climate change. In “Sanctions: What Everyone Needs to Know“, Bruce Jentleson (one of America’s leading scholars on the subject) answers the fundamental questions about sanctions today: Why are they used so much? What are their varieties? What are the key factors affecting their success? Why have they become the tool of first resort for states engaged in international conflict? Jentleson demonstrates that examining sanctions is key to understanding international relations and explains how and why they will likely continue to bear on global politics. 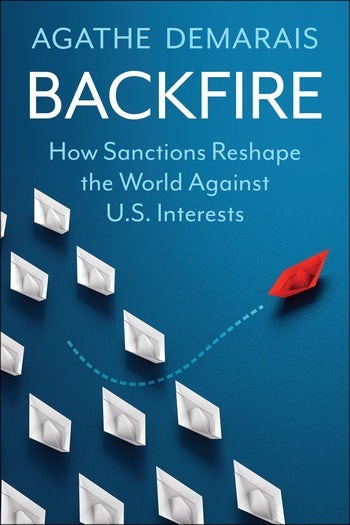 Backfire: How Sanctions Reshape the World Against U.S. Interests
Sanctions have become the go-to foreign policy tool for the United States. Coercive economic measures such as trade tariffs, financial penalties, and export controls affect large numbers of companies and states across the globe. Some of these penalties target nonstate actors, such as Colombian drug cartels and Islamist terror groups; others apply to entire countries, including North Korea, Iran, and Russia. U.S. policy makers see sanctions as a low-cost tactic, but in reality these measures often fail to achieve their intended goals—and their potent side effects can even harm American interests. ‘Backfire: How Sanctions Reshape the World Against U.S. Interests’ (Columbia University Press, 1st Edition, November 2022) explores the surprising ways sanctions affect multinational companies, governments, and ultimately millions of people around the world. Drawing on interviews with experts, policy makers, and people in sanctioned countries, Agathe Demarais examines the unintended consequences of the use of sanctions as a diplomatic weapon. The proliferation of sanctions spurs efforts to evade them, as states and firms seek ways to circumvent U.S. penalties. This is only part of the story. Sanctions also reshape relations between countries, pushing governments that are at odds with the U.S. closer to each other—or, increasingly, to Russia and China. Full of counterintuitive insights spanning a wide range of topics, from Russia’s invasion of Ukraine to Iran’s COVID response and China’s cryptocurrency ambitions, Backfire reveals how sanctions are transforming geopolitics and the global economy—as well as diminishing U.S. influence. This insider’s account is an eye-opening, accessible, and timely book that sheds light on the future of sanctions in an increasingly multipolar world.

The first year of President Joe Biden’s administration witnessed major developments in U.S. sanctions strategy, including a general review of all sanctions programs under the auspices of the U.S. Department of the Treasury. Most notably, the Treasury has revised and expanded its sanctioning authorities to align with the broader foreign policy objectives of the Biden administration and to respond to global developments, such as by reactivating its country-specific program on Burma, issuing licenses for counterterrorism sanctions against the Taliban, creating new sanctions programs on Ethiopia, establishing the United States Council on Transnational Organized Crime, terminating its program on Burundi, revoking terrorist designations on the Revolutionary Armed Forces of Colombia (FARC) and the Ansarallah (Houthis), and issuing the first-ever virtual currency–related designation on a Russian cryptocurrency exchange for facilitating financial transactions linked to ransomware. Additionally, the Biden administration decided to waive sanctions related to the Nord Stream 2 project, a 1,200 kilometer-long natural gas pipeline running from northern Russia to Europe across the Baltic Sea, which continues to generate significant controversy in Congress.

The Biden administration has demonstrated its intent to continue using sanctions within its foreign policy toolkit to combat illicit activity that threatens both national security and the security of U.S. allies and partners. In 2021, the Treasury issued a total of 765 new designations with the majority (51 percent) pursuant to country-specific sanctions programs, mainly Belarus, Burma, China, and Russia, and 787 delistings with roughly 92 percent pursuant to thematic sanctions programs, mainly addressing drug trafficking. Coordination with allies—especially the European Union, United Kingdom, and Canada—to address human rights abuses abroad was a recurring theme in a large number of sanctions designations for both country-specific and thematic sanctions programs. In tandem with allies during the Summit for Democracy and International Human Rights Day in early December, the United States levied 45 new designations to address human rights abuses and their facilitators across the world, including in countries such as China, Burma, Russia, North Korea, and Bangladesh. These multilateral efforts contrast to the previous administration, which mainly used unilateral sanctions to support its “maximum pressure” sanctions campaign against key country targets like Venezuala, North Korea, and Iran. This suggests that the Biden administration seeks to take a more cautious approach toward leading foreign policy strategy with the use of sanctions.

This CNAS edition of Sanctions by the Numbers provides a snapshot of overall sanctioning trends, an overview of the most heavily used country-specific and thematic sanctions programs, and the global distribution of sanctions designations during the first year of the Biden administration.

China-related Sanctions (Excerpt)
In addition to the 70 designations pursuant to the country-specific sanctions program on China (CMIC), the Treasury imposed 30 designations on China-related targets under various other sanctions programs. To address continued human right abuses in Xinjiang against the Muslim Uyghurs, the Treasury—along with Canada, the EU, and UK—sanctioned two Chinese government officials, Wang Junzheng and Chen Mingguo, pursuant to human rights–related authorities. OFAC also imposed seven Hong Kong–related designations pursuant to Executive Order 13936, which addresses the oppressive actions of the Chinese government and Hong Kong authorities against democratic protests linked to Beijing’s Hong Kong National Security Law. The remaining sanctions on China and Hong Kong–related targets are pursuant to GLOMAG, SDGT, ISFR, DPRK3, and ILLICIT-DRUGS-EO for providing designated terrorist groups, such as the IRGC-QF and Hezbollah, with financial assistance and money laundering services.

Russia-related Sanctions (Excerpt)
The Treasury imposed the largest number of sanction designations on Russia-related individuals and entities (95) in response to Moscow poisoning anti-corruption and political activist Alexei Navalny, attempting to influence the U.S. election, authorizing the illegal occupation of Crimea, developing chemical weapon capabilities, and conducting malicious cyber activities against the United States and its allies. After consulting with European allies, the Treasury imposed its first round of sanctions in March 2021 on seven Russian government officials and three government research institutes in connection with the poisoning of Navalny. Later that year, the Treasury imposed additional sanctions against associated Russian targets alongside the European Union (EU). In April, the Treasury continued to coordinate with allies through joint sanctioning efforts involving the EU, the UK, Canada, and Australia, and imposed a total of 32 sanction designations against Russian government officials responsible for the occupation of Crimea. Beyond targeting government officials involved in the occupation, these designations also included individuals and construction companies involved in creating the Kerch Strait Bridge to connect mainland Russia to Crimea, which hastened the occupation process. The Treasury issued its first-ever designation on a virtual currency exchange, SUEX, based in Russia for facilitating transactions related to ransomware payments. In addition to this designation, the Treasury also imposed CYBER2 sanctions on two ransomware operators, Ukrainian national Yaroslav Vasinskyi and Russian national Yevgeniy Polyanin, for their involvement in ransomware attacks against nine U.S. companies, including the July 2021 Kaseya ransomware attack. As previously mentioned, the Treasury has issued 35 PEESA-related sanctions designations on Russian targets involved in threatening European energy security.