The FCPA Clearinghouse’s quarterly report provides an overview of some of the more notable trends and statistics in FCPA enforcement activity to emerge during the first quarter of 2022.

There are a number of different ways to define FCPA enforcement activity and to count the number of new actions initiated each year. The FCPA Clearinghouse does not advocate one counting methodology over another, but instead presents the data in a number of different ways so that users can make their own informed judgments. Because our counting methodologies rely on defined terms (which are denoted below in bold), we make those definitions available at the “Definitions” tab of the About Us page.

Enforcement activity remained slow in the first quarter of 2022, with the DOJ filing two FCPA-related Enforcement Actions and issuing one declination with disgorgement pursuant to the FCPA Corporate Enforcement Policy during the quarter and the SEC initiating one enforcement action. Below is a list of all enforcement actions filed, announced, or unsealed between January and March of 2022. 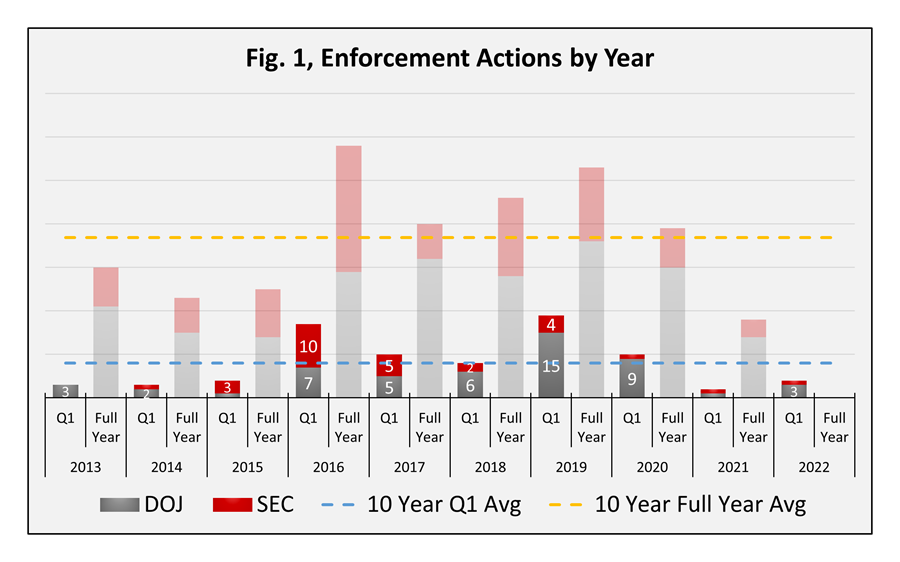 According to information disclosed in SEC filings and charging and settlement documents, the SEC and DOJ each concluded two publicly-disclosed FCPA-related investigations in the first three months of 2021. The SEC brought an enforcement action against KT Corporation. The DOJ issued a declination pursuant to its FCPA Corporate Enforcement Policy to Jardine Lloyd Thompson Group Holdings Ltd. (JLT). The declination concludes the investigation at March & McLennan Companies, Inc., which acquired JLT in 2019. Both agencies closed their investigations into Cisco Systems, Inc. without taking any further action. Braskem S.A. also closed its internal investigation into possible FCPA-related misconduct in Mexico, although it is unknown whether the DOJ or SEC ever opened independent investigations into the company.

Proposed Changes to the SEC Whistleblower Program Rules
On February 10, the SEC proposed two amendments to the whistleblower program rules that could affect the amount of a potential reward a whistleblower could receive. The first proposed amendment would allow the SEC to pay whistleblower awards for certain actions brought by other agencies. The second proposed amendment would affirm that the SEC could consider the amount of a potential award only for the limited purpose of increasing the award but not lowering it.According to SEC Chair Gary Gensler, “[t]he first proposed rule change is designed to ensure that a whistleblower is not disadvantaged by another whistleblower program that would not give them as high an award as the SEC would offer. Under the second proposed rule change, the SEC could consider the dollar amounts of potential awards only to increase the whistleblower’s award. This would give whistleblowers additional comfort knowing that the SEC could consider the dollar amount of the award only in such cases.” The extent to which these proposed amendments will alter the landscape for possible FCPA whistleblowers is unclear. The DOJ, which also enforces the FCPA, does not have a whistleblower reward program.Notably, the Commodity Futures Trading Commission (CFTC), which regulates the U.S. derivatives markets, issued an advisory on March 6, 2019 on self-reporting and cooperation for Commodity Exchange Act (CEA) violations involving foreign corrupt practices, indicating that companies and individuals engaging in such practices may be liable for fraud, manipulation, false reporting, or a number of other types of violations under the CEA and Commission Regulations. The CFTC bolstered this initiative in May 2019 by issuing an alert advising that individuals can become eligible for both financial awards and certain protections under the CFTC Whistleblower Program for reporting CEA violations connected to bribes of foreign government officials or similar conduct. On December 3, 2020, the CFTC announced a settlement with Vitol Inc., marking the first action brought by the CFTC involving foreign corruption (the DOJ also prosecuted Vitol for FCPA violations).
Ukraine
Russia’s invasion of Ukraine that began on February 24, 2022, and the significant sanctions imposed on Russia by the U.S., U.K. and the European Union, have upended global geopolitics and international business. Many U.S. and foreign multinational companies have pulled out of Russia, and many of the same companies have suspended operations in Ukraine due to the ongoing conflict. It seems likely that the war will reverberate in the FCPA sphere for some time to come, both for companies seeking to do business in Russia or Ukraine and for government agencies seeking to enforce the FCPA based on misconduct in either country.The war will almost certainly impact the ability of U.S. authorities and companies to conduct comprehensive investigations, including being able to access documents, make witnesses available, or cooperate with Ukrainian or Russian authorities. Currently, U.S. authorities appear to be investigating, at a minimum, Dr. Reddy’s Laboratories Ltd. for possible FCPA-related misconduct in Ukraine and Pfizer, Inc. for possible FCPA-related misconduct in Russia. Indeed, in its most recent 10-K filing, Pfizer noted the conflict as a risk factor in its global operations, but it stopped short of identifying specific ramifications to its ongoing investigation.Historically, Russia has seen its fair share of corruption, tying for fourth among countries most frequently implicated in FCPA-related bribery schemes over the last ten years, and consistently ranking poorly on the Transparency International Corruption Perceptions Index (CPI). While also ranking poorly on the CPI, Ukraine ranks a distant tenth (tied with nine other countries) in terms of countries most frequently implicated in FCPA-related bribery schemes.Although many enforcement actions involve misconduct in Russia, only one major Russian company has ever been named as a defendant in an FCPA enforcement action, and no companies headquartered or incorporated in Ukraine have been similarly charged. Mobile Telesystems PJSC, a Russian telecommunications company that conducted its business in various countries in the territory of the former Soviet Union, settled with the DOJ and SEC in 2019 for misconduct in Uzbekistan. In March of this year, the DOJ extended the company’s deferred prosecution agreement for an additional year. A joint motion filed by the company and the DOJ in court said that while the company had “made significant improvements to its compliance program, certain critical components of MTS’s anti-corruption compliance and ethics program [we]re in the early stages of development, [we]re not yet effective, and w[ould] not be implemented and tested prior to the end of the term.”
Looking Ahead
As the Clearinghouse has noted in prior reports, the number of new publicly disclosed FCPA-related investigations has declined significantly in the past few years, which could be predictive of fewer enforcement actions in years to come. Nevertheless, at least three companies (Glencore plc, Honeywell International Inc., and Stericycle, Inc.) have recently disclosed accruals in anticipation of settling FCPA-related investigations. A settlement involving Glencore looks to be among one of the biggest FCPA-related settlements in history given the company’s $1.5 billion accrual. The company said it expects a settlement this year.

The Foreign Corrupt Practices Act: An Overview  The Foreign Corrupt Practices Act of 1977, as amended, 15 U.S.C. §§ 78dd-1, et seq. (“FCPA”), was enacted for the purpose of making it unlawful for certain classes of persons and entities to make payments to foreign government officials to assist in obtaining or retaining business. Specifically, the anti-bribery provisions of the FCPA prohibit the willful use of the mails or any means of instrumentality of interstate commerce corruptly in furtherance of any offer, payment, promise to pay, or authorization of the payment of money or anything of value to any person, while knowing that all or a portion of such money or thing of value will be offered, given or promised, directly or indirectly, to a foreign official to influence the foreign official in his or her official capacity, induce the foreign official to do or omit to do an act in violation of his or her lawful duty, or to secure any improper advantage in order to assist in obtaining or retaining business for or with, or directing business to, any person.
Since 1977, the anti-bribery provisions of the FCPA have applied to all U.S. persons and certain foreign issuers of securities. With the enactment of certain amendments in 1998, the anti-bribery provisions of the FCPA now also apply to foreign firms and persons who cause, directly or through agents, an act in furtherance of such a corrupt payment to take place within the territory of the United States.
The FCPA also requires companies whose securities are listed in the United States to meet its accounting provisions. See 15 U.S.C. § 78m. These accounting provisions, which were designed to operate in tandem with the anti-bribery provisions of the FCPA, require corporations covered by the provisions to (a) make and keep books and records that accurately and fairly reflect the transactions of the corporation and (b) devise and maintain an adequate system of internal accounting controls. For particular FCPA compliance questions relating to specific conduct, you should seek the advice of counsel as well as consider using the DoJ’s FCPA Opinion Procedure. Transparency International’s 2021 Corruption Perceptions Index shows that the U.S. has started to score under 70, ranking just below Buthan and the UAE.

On December 6, 2021, the Biden administration announced a sweeping new anti-corruption strategy. The “United States Strategy on Countering Corruption“ (SCC)  follows President Biden’s declaration, in a June 3, 2021 Memorandum, that corruption enforcement is a “core United States national security interest.” This strategy is even more striking in the context of multiple Department of Justice (DOJ) announcements made throughout the fall to “surge resources” for corporate enforcement, revise its corporate criminal enforcement policies, and adopt a new stance on corporate recidivism. This series of recent developments—and folding them into the national security agenda—make clear that the Biden administration is serious about leading the efforts to “prevent and combat corruption at home and abroad.”

It has been reported that of the nine open Foreign Corrupt Practices Act (FCPA) investigations disclosed by public companies in 2021, all nine are of non-U.S. companies. Additionally, of the top ten FCPA fines of all time, nine were levied against non-U.S. companies. This underscores the importance of implementing an effective compliance program that can withstand the scrutiny of aggressive FCPA enforcement.

Note: Many professionals are anticipating an increase in FCPA enforcement actions in 2022, so now is a good time to review your compliance programs and make any necessary improvements.